Recently I received a document entitled " Identification Sheets for Wildlife Species Traded in South East Asia". It had been produced by TRAFFIC South East Asia to assist enforcement officials identify wildlife species commonly found in trade. Its focus is equally as relevant here in the UK, in Europe, the USA and elsewhere as in Asia.
TRAFFIC, established in 1976, oversees the wildlife trade and monitoring network, and is a joint programme of the World Wildlife Fund (WWF) and the International Union for the Conservation of Nature (IUCN). It works in close co-operation with the Secretariat of CITES (see below) and details of its structure and activities can be found at http://www.traffic.org/
As you can imagine it has connections with many organizations worldwide one of which is the Wildlife Alliance USA (http://www.wildlifealliance.org/ ), which has a community focus that compliments the work of TRAFFIC. Whilst the following information is a little formal in content, it is worthwhile setting it out to explain that there are efforts made worldwide to protect our most vulnerable species from the ravages of trade. CITES ( the Convention on International Trade in Endangered Species of Wild Fauna and Flora ) is an international agreement between Governments aimed at ensuring international trade in specimens of wild animals and plants doesn't threaten their survival.
There are three official "Appendices" which apply controls to the 30,000 (yes,thirty thousand!) species covered in the Convention. Various levels of regulation apply, obviously aimed at minimizing the threat to species based on their status in the wild at the current time. It can be complicated, as many differing levels of legislation and regulation might apply, but clearly efforts are directed at maintaining viable populations of species listed.
Sadly, trade persists outside the limits of such controls and continued vigilance at points of importation and exportation are essential. The document makes alarming reading in that it brings home the unfortunate focus which is directed at our most vulnerable wildlife. There are many species we might not recognize, but the names of others, like the Tibetan Antelope, Snow Leopard and Sun Bear, are all too familiar due to television programmes.Such could be said to be the "iconic end" to a list that embraces various otter and primate species, Hornbills, Parrots, Crocodiles and Alligators, Lizards, Snakes, Turtles, Tortoises, Frogs, Fish and plants like Orchids. Even the diminutive Seahorse is included!!
It is all too easy to say" Why can't it be stopped in this day and age"?. The reasons are many and complex and range from cultural traditions, unscrupulous trading, to sheer acquisitive possession. Whilst we're all aware of the alleged properties of Rhino horn, the extensive demand for animal parts for traditional medicinal products of all kinds is frightening. Given the rarity of some specimens and by-products there are always those who will take the risk of trading in such goods in order to make money. At the other end of the spectrum there are those for whom the illegal procurement and possession of a rare specimen is both an obsession and a risk worth taking.
Endless other machinations creep in as well. I'd not even appreciated that, beyond the demand for live specimens, bird of prey carcases, including owls, were also in demand for medicinal purposes and magic! The pet trade, the song bird trade, the wild meat trade, the skin trade, the jewellery trade, besides the traditional medicines trade, all have connections to these activities. Now, before you stride off and lobby your hapless local pet shop owner or others, appreciate there is trade allowed in common or sufficiently abundant species, which can be obtained under licence , but are still scrutinized under the regulations mentioned above.
However, as an example of how illegal trade manifests itself, there was a report in September, 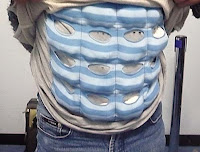 2009 of a man trying to smuggle 39 parrot eggs from Bali into Western Australia in a special vest made for the purpose!
He was apprehended at Perth International Airport and charged with smuggling wildlife into the country. Later another man was charged with the alleged possession of endangered species specimens and wildlife smuggling offences.
{ May I thank the Australian Customs and Border Protection Agency for the illustration opposite. }.
An aspect that is sometimes not as apparent as might be the case is that smuggling such "merchandise", be it horn, skins, live specimens or derivatives, can involve lucrative trade practices by well organized syndicates. Such is being done for money, big money sometimes! This is a challenge of "practice", as opposed to the need to amend cultural traditions when it comes to the use of traditional medicines . None of these challenges are easy to address and all agencies involved deserve our support and recognition.
Sadly it is not only the rare and exotic that fall foul of the collecting mentality or the willingness to submit requirements through the appropriate legal procedures. 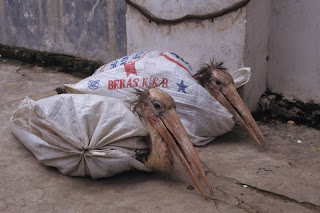 The Lesser Adjutants shown in the illustration are not listed on CITES, but evoke the same sympathy in my view, by being in demand and traded as live specimens as are their rarer counterparts. With the wonderful filmed offerings on television nowadays and the plethora of wildlife trips available, do we not need to move on and set aside the opportunities to possess or have "close proximity" experiences of some wretched, captive specimen , however well housed? I suppose it's not everyone who can holiday in Cambodia, go into the reserve area on the Tonle Sap and see the birds above in the wild. But by not objecting to their incarceration we're lending justification to it and helping demand!!
In summary, all of this is disgusting, saddening and a blight on the more civilized views that most people hold towards our natural world and what it contains. However, it is an unfortunate reality and clearly something which needs to be addressed, contained and hopefully eliminated. At a personal level our vigilance, both at home and abroad, is necessary but , above that, our willingness to lend support to constituent organizations involved is an imperative, be it directly or in any campaigning they conduct.
Finally I think we ought to recognize the commitment shown by all staff associated with this worldwide" policing" of such illegal activities. The continuing resolve needed to address such disheartening activities on a regular basis is to be admired and our moral support and thanks should be a continuing "given" in this respect. And on that note may I personally thank Richard Thomas ( TRAFFIC UK ) for his assistance with a variety of elements relied upon for the above.
Posted by John S. Armitage at Sunday, December 27, 2009