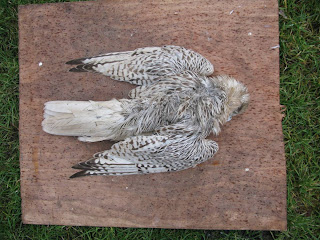 After what has been a period of enjoyment for many it's now sad to report that the carcass of a Gyr Falcon was today found along one of Islay's beaches. What remains of the bird can be seen in the image above kindly provided by Malcolm Ogilvie.

Despite what is presumed to be this bird seen feeding last Tuesday morning on the Oa by Andy Schofield its overall condition was described as emaciated. A sad ending for a very fine creature! The fact now remains as to whether there has ever been two birds present on the island as I raised previously. A hunt is now on to track down the various photographs which various people have been fortunate enough to obtain. If anyone reading this is in a position to assist then, please, do get in touch. Thanks.

On a happier note, the female Brambling has again put in sporadic appearances over the past couple of days at the garden feeders and numbers of Chaffinches have risen quite noticeably. By contrast, and since mid autumn last year, Greenfinches have been noticeable only by their absence!
Posted by John S. Armitage at Sunday, February 14, 2010