Initial plans to be on Jura had suddenly to be altered so I decided to adopt the same objectives for the day, i.e. visiting various woodlands, but direct them at Islay! It turned out to be a good "second best" decision as the day emerged glorious with a warming sun for a while that injected vitality into everything. 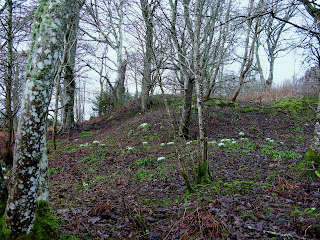 Amidst the decaying leaves of last year the signs of emergent spring was present in the form of Snowdrops, more of which will doubtless carpet the woodland floor shortly. Blackbirds and Song Thrushes seemed to be everywhere and we seem to have retained a high wintering population. By contrast few Robins or Wrens were evident, but most titmice were noticeably active and Great Tit and Coal Tit in occasional song. A Dipper and a Chaffinch both tried a few ,as yet, slightly discordant phrases but, surprisingly, all thrush species remained silent. Goldcrest, Long-tailed Tit and Treecreeper were absent, possibly victims of the harsh weather experienced previously. All in all it was encouraging to see and hear so much activity, a mere prelude, of course, to what will be on offer a little later.
Posted by John S. Armitage at Wednesday, February 03, 2010